Xinhua News Agency, Tokyo, July 30 (Reporters Ji Ye and Wu Shuguang) The Tokyo Olympics is now halfway through the schedule. In a joint interview with the International News Agency recognized by the International Olympic Committee on the 30th, IOC President Bach believed that Chinese athletes have made great achievements. Success has also contributed to many non-traditional strengths. He is also satisfied with the epidemic prevention work of this competition. So far, the detection rate of positive cases of Olympic-related personnel is only 0.02%. And 90% of the Japanese people are watching the Olympics on TV, showing the host’s attention to the Olympics.

In response to a Xinhua News Agency reporter’s question about the overall performance of Chinese athletes, Bach said: “The success of Chinese athletes speaks for itself. When I checked the medal list 15 minutes ago, China had already won 18 gold medals. I don’t know when I was speaking. Will it increase.”

Bach said: “I think this is a huge success (for the Chinese delegation), and this time in many non-traditional strengths, China has also performed very well. Obviously, the Chinese Olympic Committee has done a great job preparing athletes.”

The community with the highest frequency of new crown detection

The current event under the epidemic was held in the “Olympic Bubble”. Bach used a set of data to introduce the results of Olympic epidemic prevention. “Since the start of the competition, Olympic personnel have carried out 350,000 new crown virus tests, and the detection rate of positive cases is only 0.02%, which is very low. The vaccination rate in the Olympic Village has also exceeded 85%. The Olympic Village may be the world (new crown virus). ) In the community with the highest frequency of detection, the Olympic Games has become the most closed-loop sports event in the world.”

However, he said that with the start of the game, the charm of sports is full. “In the competition venues and in the Olympic Village, you can feel the enthusiasm brought by the athletes.” 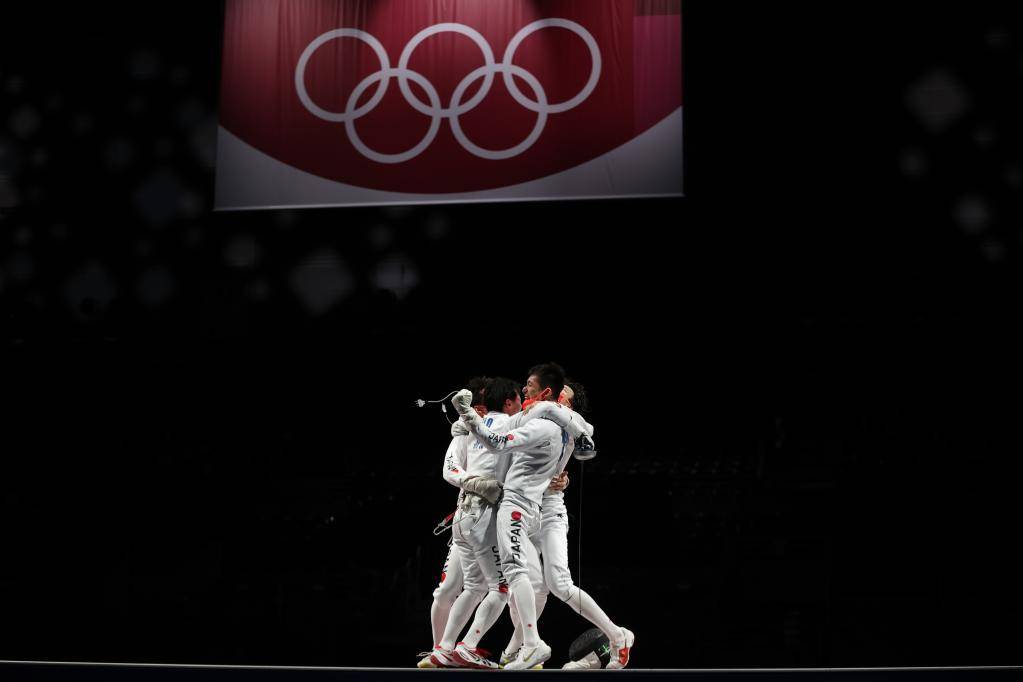 On July 30th, the Japanese players celebrated after the men’s epee team gold medal competition in the fencing event of the Tokyo Olympics.Photo by Xinhua News Agency reporter Zheng Huansong

Five new events were added to this competition: rock climbing, skateboarding, surfing, karate and baseball and softball. Bach said that the new project has achieved its original goal. “New projects are more attractive to young people. This can be seen from the data feedback on digital platforms. We should pay attention to and develop what sports people like.”

In this competition, American gymnast Byers withdrew from the women’s individual all-around final “out of the importance of his mental health.” The main torchbearer of the Tokyo Olympics and tennis star Naomi Osaka was eliminated in the third round of the women’s singles. She also mentioned in previous interviews that she has been disturbed by psychological depression since she was at the US Open in 2018.

Bach is also very concerned about the mental health of athletes. He said that the pressure of sports competitions and the impact of the epidemic have affected the physical and mental health of athletes. The International Olympic Committee has been paying attention to this issue, which is why it initiated the “Stay Strong, Stay Active, and Stay Healthy” during the epidemic.Return to Sohu to see more

The appeal of a doctor from Eppan “Young and undecided, get vaccinated”

Irving’s one attack, one pass, one defense is...

Usa, Biden: “Kamala Harris will race with me...

Cagliari loses to Sassuolo and says goodbye to...

Zheng Zhi will go out with the national...

There is the Spezia in S. Siro Pioli...