This exhibition is “red” 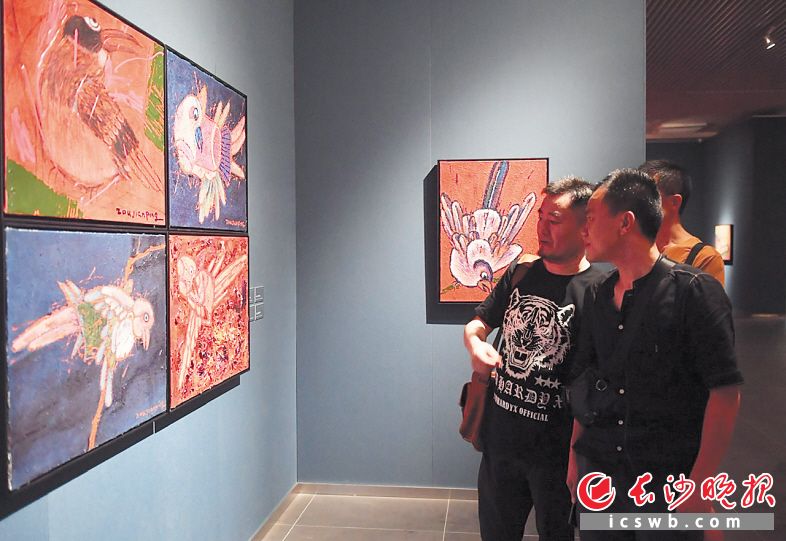 Installation art in the exhibition.

Changsha Evening News, August 7th (all media reporter Yin Wei) The sunset reflects the Xiangjiang River, dyeing the art museum red. On the evening of the 7th, “The Solemnity Handed Down – Zou Jianping’s Works Exhibition” opened at Li Zijian Art Museum, exhibiting the excellent works created by Zou Jianping, vice chairman of Hunan Artists Association and visiting professor of Changsha Normal University in recent years. Different from the colorfulness of previous exhibitions, this batch of works used a lot of red, which left a deep impression on the audience.

Walking into the exhibition hall, the eyes are full of red, and the wall is full of red, as if breaking into a red cave, and it seems to merge into a red ocean. The trees depicted by the artist are red, and the former residence of Chairman Mao in “Sacred Mountains and Rivers: Shaoshan” is surrounded by red mountains and forests, showing the romantic image of “the country is full of sunshine”; the clouds depicted by the artist are red, “Big Bird: Flying” The bird in the “Coming Yun-20” is stepping on a red cloud and waving its wings, as if saying “hello” to the transport plane in the distance; the people in the artist’s pen are also red, and “Red Handprint” uses three primary colors to paint, red The slender jade hands, golden nails, and blue-green interwoven backgrounds are impressive in bold, yet unpretentious colors. The audience sighed one after another: “Mr. Zou is an artist who has profound insights into art forms and concepts. He is very popular and has a distinct personality.”

See also  Hyun Bin and Son Ye Jin are about to end their honeymoon and return to South Korea on April 28.

Looking back at Zou Jianping’s past works, the use of red has not yet reached such a striking and important level. What exactly is this transformation? It turned out that between 2019 and 2020, he traveled to Yungang in Shanxi, Kuqa in Xinjiang, and Ali in Tibet, visited Yungang Grottoes, the ancient city of Qiuci and the ruins of the Guge Kingdom, and was especially selected as the first batch of national key cultural relics protection units The ruins of the Guge Kingdom left a deep impression on him. As early as the 1980s, the “Tibetan Guge Murals” published by Anhui Fine Arts Publishing House shocked Zou Jianping and made a wish for a field trip. When his wish became a reality, the splendid colors immediately aroused his desire to create, and he re-examined the medium and schema, content and concept in his creation. For example, in the “Storage” series, Zou Jianping depicts the grottoes of Kumtula and the temples of the Guge Kingdom with an impressionistic attitude, and the “Plateau Red” and “Sapphire Blue” from Tibet are laid out in large pieces in the works. In the middle, mottled oil pastels smear imprints on the intricate lines of handmade paper, which is eye-catching. In Zou Jianping’s view, the biggest gain of this trip to the west is to confirm that Eastern and Western cultures have been intertwined and collided back and forth in history. When people mention traditional Chinese culture as ink and wash, in fact, its connotation is much more than that. The “Gaoyuan Red” has also had a profound impact on his creations.

There is also a small amount of installation art in the exhibition. A bright red locomotive was placed in the center of the exhibition hall, attracting a large number of audiences to take photos with it. According to the curator Yuan Tingxuan, Zou Jianping’s visual language is no longer limited by materials and techniques, and mixed-material paintings and ready-made installations are widely used. Structural adhesive and other materials. The use of comprehensive materials is another major feature of this exhibition. Iron wire and X-ray films can become lively works of art under the artist’s skillful hands.

The exhibition will last until August 21 and is open to the public free of charge.

“He predicted the year of Queen Elizabeth’s death,”...

Windows 12 has news or will be released...

Dapeng directed and starred in the comedy film...

DAY6 all members renew their contracts with JYP...

Telling the birth of the first molten iron...