Home Health After a lapse of ten years, Google has launched a tablet Android system, can it snipe the iPad?
Health

After a lapse of ten years, Google has launched a tablet Android system, can it snipe the iPad?

In 2021, why would you still buy an Android tablet? Less than 20,000 yuan, 120Hz screen, 2K resolution, and flagship processor are all qualified “beddings.”

Some time ago, a friend who bought a new Android tablet said that the price is not high, the specifications are good, and the screen is large. It is most suitable for watching dramas and listening to music in bed. It can also be used as an external screen when needed. In his view, Android tablets are pure entertainment products. Although the old-fashioned application compatibility issues are restricted, the priority of sharing ecological tablets with mobile phones will always lag behind, and there are still a large number of programs that are not compatible with tablets.

As the head of Android, Google is finally about to change. Immediately after the release of Android 12, the Android 12L system designed for large-screen devices was launched. Can Google succeed this time?

▲ Google is expected to launch the official version of Android 12L early next year.

According to Google’s plan, Android 12L will be tested in winter and will be launched in the first quarter of next year. There will be new devices equipped with new systems on the market. If you want to experience it, you can only use the official Android emulator. Due to the preview system for developers, there are not many functions that ordinary users can use.

See also  Covid, the virus changes again. The only answer is to get vaccinated

The easiest change to see is the Dock bar, which is much longer than the mobile phone, but it may be the first preview version. Only 5 resident applications can be reserved. The small horizontal bar at the bottom of the system is reserved for the gesture interaction area. The operation method is similar to that of Android 12. , The user should be able to get started quickly. Long press the app and drag it from the Dock bar to automatically enter the multi-screen mode. After sliding up from the bottom to enter the multi-tasking system, there is also a split-screen button at the bottom, which is convenient for users to operate.

For large-screen devices, the importance of split screen is self-evident. In addition to displaying more on the big screen, displaying two applications on the screen can also improve operating efficiency. Google even stated that all applications will automatically enter the split screen mode after launching. Two-column display is another more sensible feature. After the screen is enlarged, the notification bar is changed to two columns, as are applications such as settings, which can be regarded as effective use of screen space. 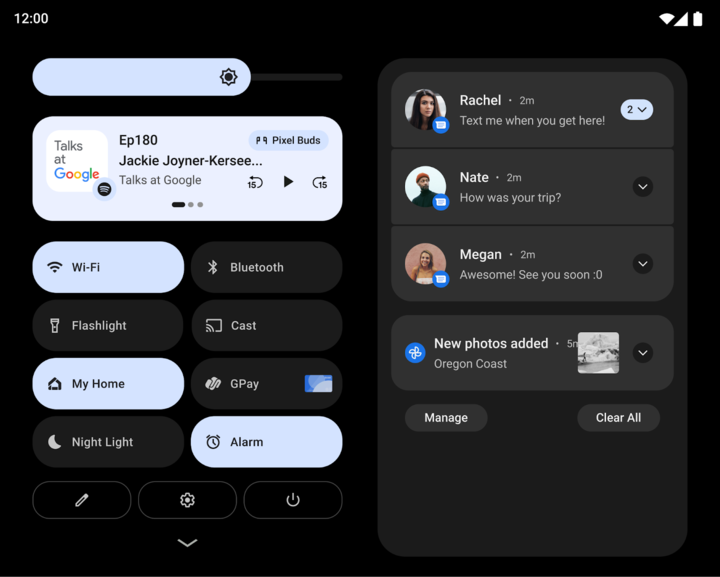 As for applications that are not yet compatible, Google said it will provide a compatible mode to improve application stability and vision.

The biggest change in Android 12 comes from Material Design, and now to Android 12L, Google has launched a new adaptive design specifically designed for large-screen devices. In simple terms, the adaptive design will determine the application display mode according to the screen size. Taking Gmail as an example, the mobile phone is normally displayed vertically, the larger folding screen mobile phone adopts dual-column display, and the larger and longer flat screen is dual-column. The display is further expanded on the basis of displaying three columns like the desktop.

As usual, Google applications will be the first batch of compatible and adaptively designed applications. The aesthetic design of third-party applications may be different from the official case, but the final UI arrangement will basically follow the standard. Does it look familiar? In addition to the adaptable design, Chinese mobile phones are also commonly used regardless of the dual-column display or the more convenient split-screen function.

In order to gain a competitive advantage, it is not new for Chinese mobile phone manufacturers to be ahead of Google, especially for tablets. Google was almost grazing in the past. Of course, it does not mean that Android 12L is completely “learning” from a friend’s product. It is to establish standards and promote the ecological development of Android tablet applications. It is obviously better than compulsory enlargement and stretching of the application. After compatibility, the tablet application experience is obviously better, and there will be no application display ratio error. ,Vague.

Change course at once 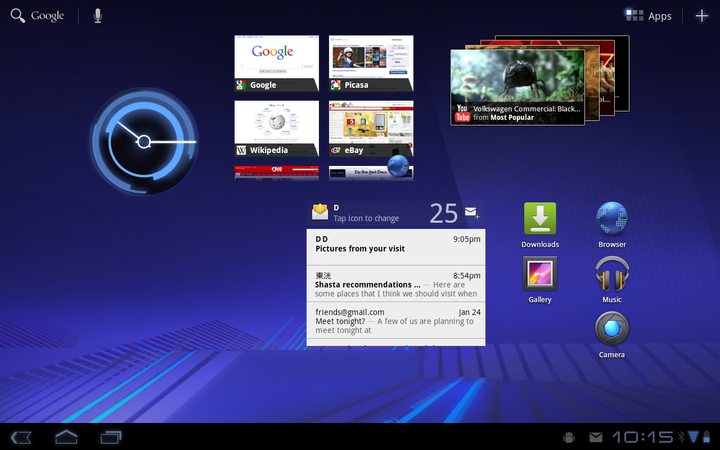 Most people may not have heard of it. Unlike mobile phones, the Google Android 3.0 system has decided to close the source and jointly develop the ecosystem with several manufacturers such as Motorola. It is difficult for other manufacturers to obtain and quickly launch devices. The closed source is to establish specifications, but obviously Google is going too fast. At that time, Android’s market share was not high, and user acceptance was not high. The Android 3.0 system was just a short-lived. Starting from Android 4.0, mobile phones and tablets have been open sourced.

Judging from the Android 12L development and design documents released by Google, this time we learned a lesson and chose to open source as usual. Strictly speaking, the Android 12L system can also be used on mobile phones, but the experience is not much different from Android 12.

▲ Both Android 12 and Android 12L use Material You design.

The second is to reduce developer development and maintenance costs.

Google Android 12L development documents indicate that it is mainly designed for devices above 600dp. dp (density-independent pixel) is a design standard specially launched by Google in order to balance the chaotic screen size of Android devices. It is linked to the pixel density (PPI), and the two can be converted in a certain ratio. .

Although the screen sizes of different mobile phones and tablets are different, the screen resolution is within a certain range, and the notification bar and the bottom gesture area are fixed. Only the size of the display element needs to be defined to ensure that the content is not covered. The size of the display element is determined, even without being affected by the resolution. 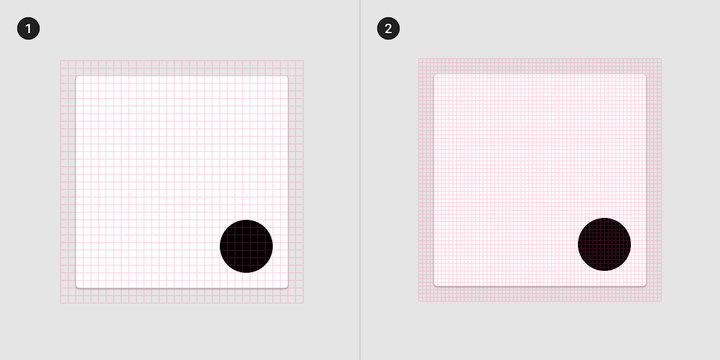 Of course dp is not a perfect design standard. It only includes mainstream screen sizes. There is still no way for rare devices. For example, individual developers or small and medium-sized organizations will selectively abandon some devices due to compatibility costs, and ultimately they will be the application in the hands of users. The display is incomplete or forced to stretch.

Compared with the iOS / iPadOS ecosystem, it is much better. Apple products are limited and there are only a few screen sizes, which makes it easier for developers. Now we may be able to understand why Google Android 12L has a compatible design. The three ratios are suitable for devices of different sizes, and the dp standard can also try to ensure that the elements are displayed consistently. 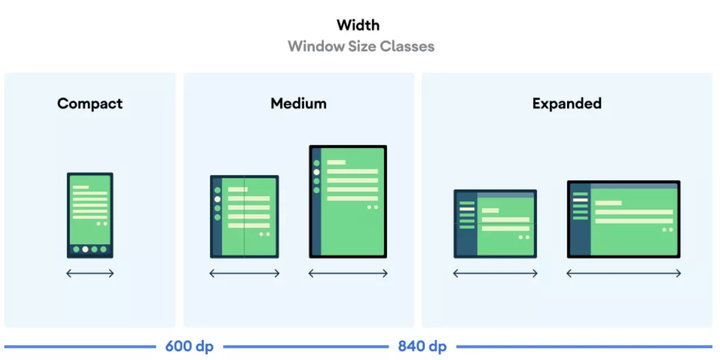 ▲ Adjust the application display according to the screen size.

The compatibility design based on the code can also reduce the developer’s workload. As for how to display, the system will automatically match the device size and resolution after the system detects it. To develop compatible multiple devices at a time, big technology companies such as Huawei and Apple are doing this, which is also the mainstream direction of the industry.

Google tweeted that there are currently more than 250 million large-screen devices equipped with the Android system, and the launch of Android 12L at this time is indeed a good opportunity. The recovery of the tablet market has prompted many manufacturers to return. Chinese manufacturers such as Xiaomi, Huawei, and Realme have all launched Android tablets. The survey agency IDC also stated that the global tablet market continued to increase steadily in the first half of this year. 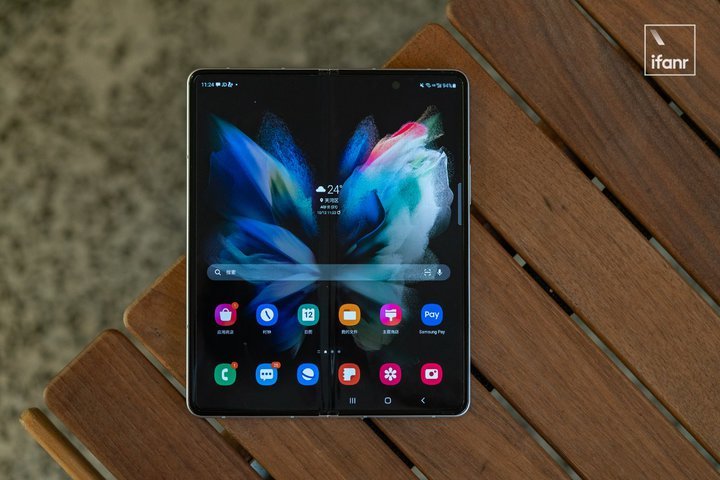 SamMobile has reported that Google will launch a folding screen device, Android 12L is like preparing for the basic application ecology. 9To5Google tried to open the emulator in the same size as the Samsung Galaxy Fold3, and experience the Android 12L preview version. The dual-column display and the more convenient split screen function are also fully equipped for the 7.6-inch Fold3.

The Google Android 12L development document mentions that the system must be able to recognize the folding screen to avoid the application content being blocked by the hinge area. At the same time, the compatibility design can better match the inner and outer screens to truly take advantage of the large folding screen and see more content. .

The Android 12L system is a good start. The key to catching up with the iPad is not in sales, but in what Android tablets can do. If you still only pursue drama and entertainment, it will not be any different from before. The richness of the application ecosystem is still the most important factor. If there are creative applications such as Procreate or even productivity applications such as Photoshop in the Android tablet ecosystem, the gap with the iPad will be shortened.

(This article is reprinted with permission from Ai Faner; the source of the first image: Created by Freepik)

Which potatoes are bad for the heart, cholesterol, sleep and blood sugar? Incredible

The movie “Looking for the Dragon: Faqiu Heavenly Coffin” is set for November 24th.

Covid, the flu vaccine may reduce the risk...

White, pink, black salt? Which is the best...

Vaccine children, your questions. “My daughter has had...

Italian Tech sent me, the right to use...

Charlene of Monaco, revealed the real disease of...

Endometriosis: Cecilia: “15 years of ordeal but the...

The first episode of Black Mirror beats the...