Guangming Net News (Reporter Song Yajuan Cai Lin Wu Yuetong)On November 24th, the 2021 China Internet Media Forum Responsibility Forum was held in Guangzhou. The forum was hosted by the Central Cyberspace Administration of China, China Central Radio and Television, and the Guangdong Provincial Committee of Cyberspace Affairs. Guangming.com, Weibo, and Guangdong Internet Industry Federation jointly organized the forum. The theme is “Responsibility: Co-governance and Sharing”. Niu Yibing, deputy director of the Central Cyberspace Administration of China, deputy director of the National Cyberspace Administration of China, Wang Huimin, editor-in-chief of Guangming Daily, Chen Jianwen, member of the Standing Committee of the Guangdong Provincial Party Committee and director of the Propaganda Department, and guests attended the forum. Vice Chairman of the China Association for Science and Technology and Secretary of the Secretariat Meng Qinghai Attend the forum by video. 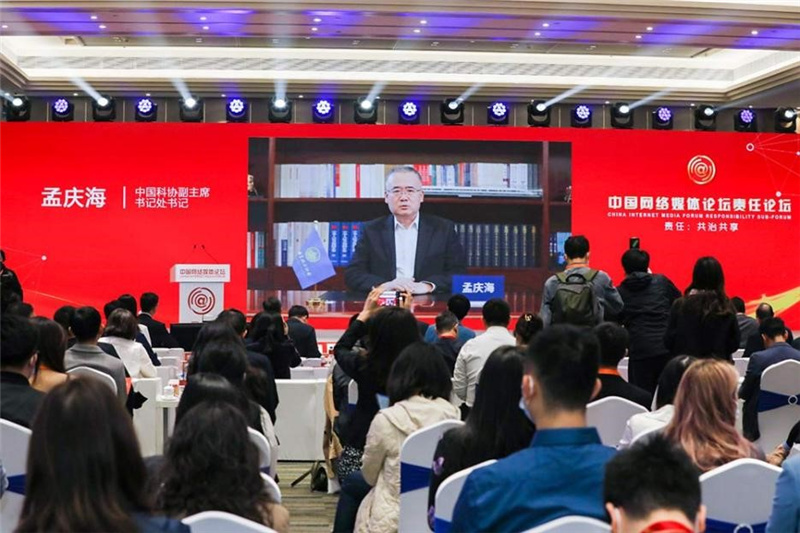 Meng Qinghai, Vice Chairman of the China Association for Science and Technology, and Secretary of the Secretariat delivers a video speech

The 48th “Statistical Report on Internet Development in China” shows that as of June 2021, the number of Internet users in my country has reached 1.011 billion, and the Internet penetration rate has reached 71.6%, forming the world’s largest and vibrant digital society. 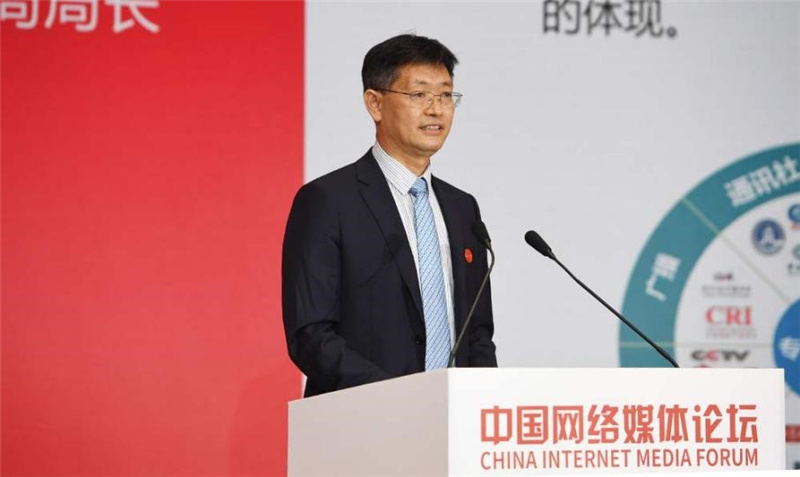 The pattern of network communication and the ecology of public opinion are being reshaped. Network media has increasingly become the main channel and platform for information dissemination, and one of the main sources for society to obtain information. Zhang Yongjun, director of the Network Comprehensive Management Bureau of the Central Cyberspace Administration of China, said that online media should accurately grasp the advantages and characteristics of online communication, fully understand their social responsibilities, and enhance the consciousness of implementing the main responsibility.

“Online media must adhere to the socialist core values ​​as the standard of judgment, have a strong sense of social responsibility, be the promoter of a great process, grasp the general trend, be moral, dare to take responsibility, and consciously integrate their own development into the country’s historical destiny and integrate into In the future of the country.” 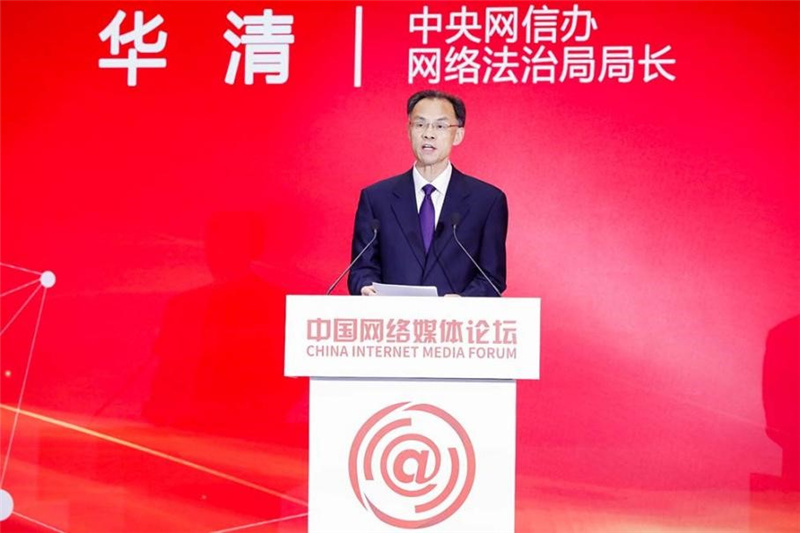 Hua Qing, Director of the Cyber ​​Law Bureau of the Central Cyberspace Administration of China, gave a speech titled “Persist in Administering the Internet According to Law and Consolidating the Main Responsibility”

The Internet is the “biggest variable” of social development. To make it the “biggest increase”, it must be established in accordance with the law. Hua Qing, director of the Cyberspace Affairs Bureau of the Central Cyberspace Affairs Office, said that at present, cloud computing, big data, artificial intelligence, etc. are developing rapidly, and new applications and formats such as mobile applications, Q&A communities, webcasting, aggregation platforms, and meta-universe continue to emerge. The media landscape and the ecology of public opinion continue to evolve and reshape, and to give play to the role of the rule of law on the Internet, we must insist on respecting the law and learning the law, and establish a firm awareness of the rule of law; Govern the network and form a joint force for governance.

See also  The film "1921" premiered in Beijing, praised for its plain language and moved the audience jqknews

Talking about the responsibility of online media, Zhang Zhian, deputy dean of the Guangdong-Hong Kong-Macao Development Research Institute of Sun Yat-sen University, a national high-end think tank, said that the Internet has been deeply involved in national governance. Facilities. And when network media moves towards an infrastructure platform, it is creating a new social landscape, which is the platform society.” 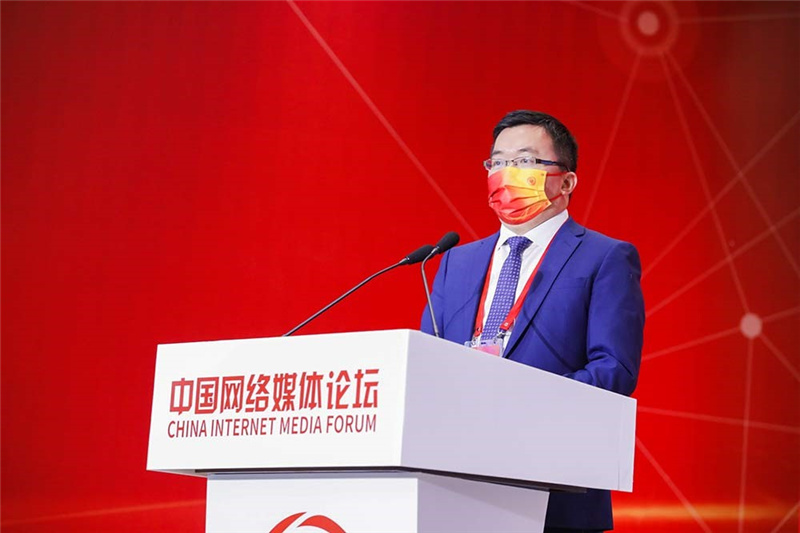 Zhang Zhian said that with the latest changes in the network content ecology, algorithm recommendation has now become a more effective personalized content distribution mechanism. As a new “gatekeeping culture”, on the one hand, algorithm recommendation should be introduced as an intelligent technology to mainstream media clients to make the client’s mainstream guidance more effective. On the other hand, algorithmic defects should be effectively avoided, such as providing users with You can turn off the option of the algorithm.

Co-governance and sharing, let the mainstream value control the algorithm

In September of this year, the Central Cyberspace Administration of China issued the “Opinions on Further Compacting the Main Responsibilities of Internet Information Content Management on Websites and Platforms”, deploying ten key contents in terms of improving platform community rules, improving the quality of information content, and strictly protecting minors on the Internet. . The forum invited representatives of Internet companies to share their experience in platform governance from the perspective of responsible parties. 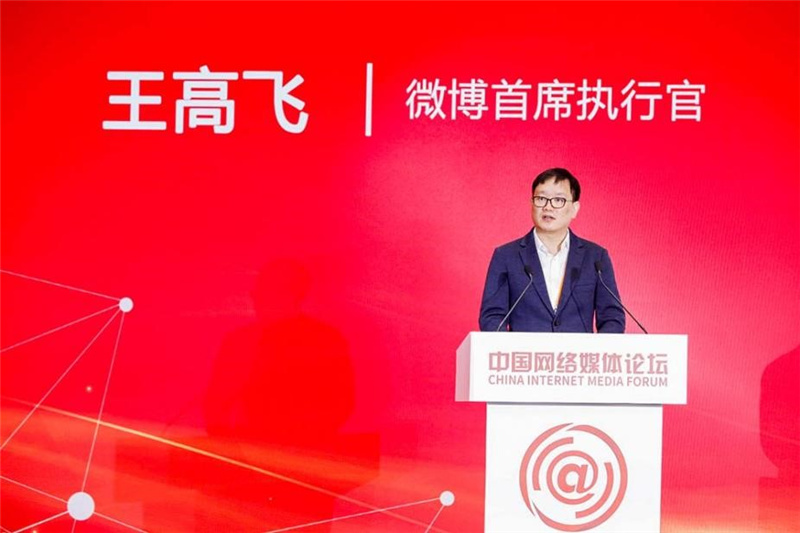 Focusing on the “behind the scenes” of hot searches on Weibo, Sina Weibo CEO Wang Gaofei believes that hot searches are a barometer of public sentiment. Through hot search, users get the latest real-time information, and governments at all levels can make decisions and govern more effectively, integrate social resources, and open up information communication channels. “A careful person should find that the hot search is getting more and more positive and warmer now. Government affairs and media accounts, as the powerful content ecological components of the Weibo platform, are gradually exerting their own issue setting capabilities to consolidate the broadest society. Consensus.” Wang Gaofei said. 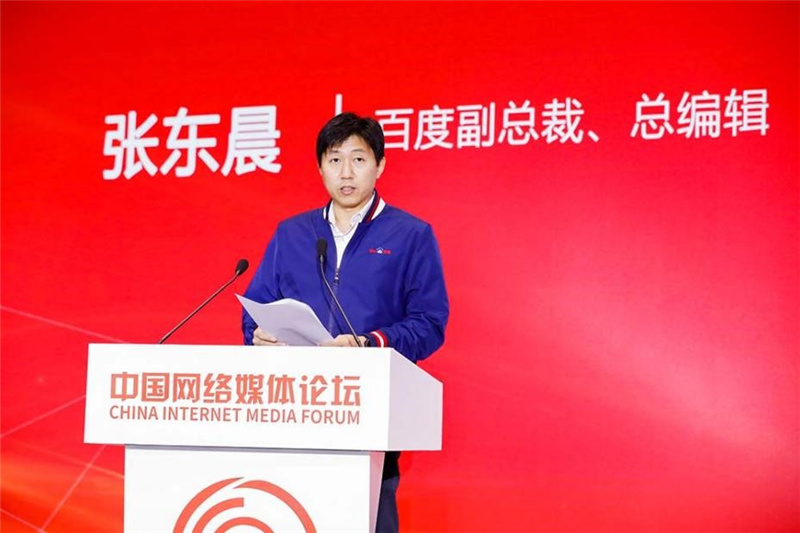 Baidu’s vice president and editor-in-chief Zhang Dongchen said that the Internet platform, as a content dissemination carrier, should use values ​​to lead technology and allow large traffic to serve positive energy. “When algorithms are used in the field of content dissemination, they should follow the values ​​of upward and good. Let value control the algorithm and let knowledge become a consensus.” 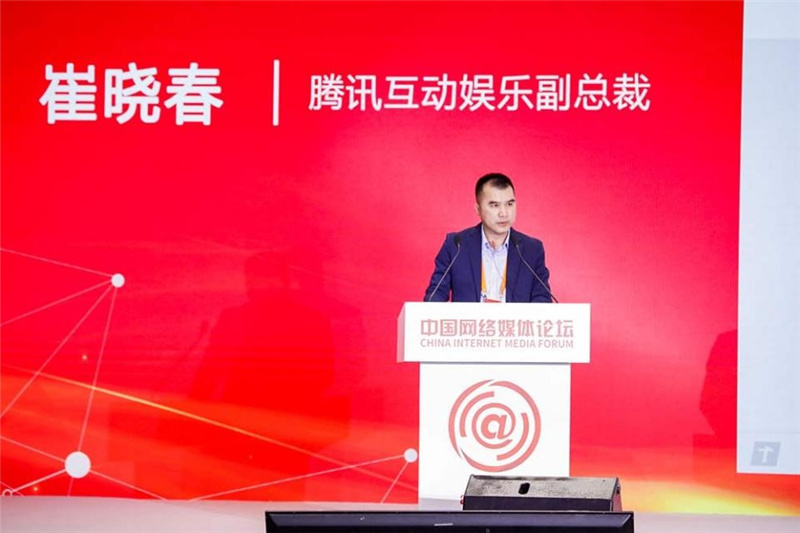 Cui Xiaochun, vice president of Tencent Interactive Entertainment, shared Tencent’s strict implementation of anti-addiction regulations. “All products and services of Tencent Interactive Entertainment take the protection of minors as the highest priority, and spare no effort to strengthen the responsibility chain of’pre-event-after-event’ to protect the healthy growth of minors.” 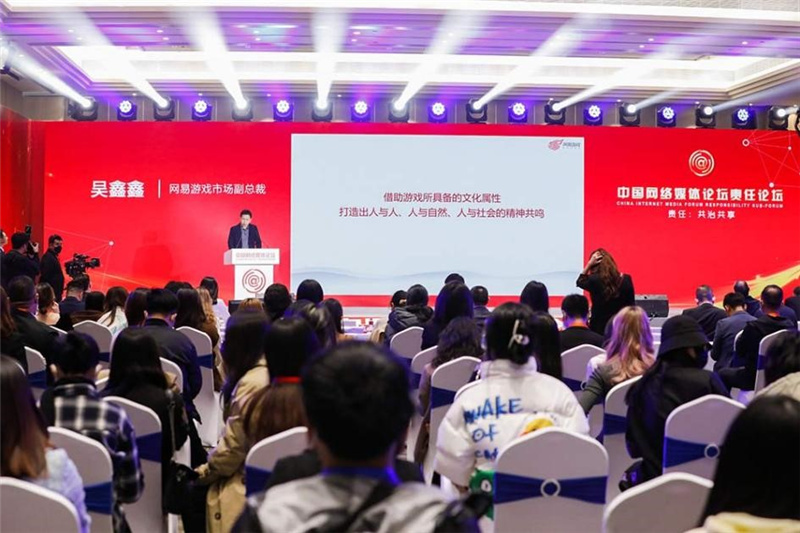 Wu Xinxin, vice president of NetEase Game Market, believes that the protection of minors is a long-term undertaking and mechanism, which requires continuous improvement and optimization with the development of the enterprise to form a long-term mechanism. “The application of new technology will further strengthen the guardian barrier of minors, and further enhance the awareness and ability of minors to use the Internet in a scientific, civilized, safe and reasonable manner. At the same time, it also encourages us to continue to strive for excellence, and we will continue to improve in the future. From the continuous optimization and improvement of the anti-addiction system, purification of the live broadcast environment, combating illegal game production, and strengthening the social protection of minors, we will take care of the healthy growth of minors.”

How to make big traffic surging with positive energy? The forum invited three post-90s youth representatives from the scientific and technological circles, literary and artistic circles, and sports to share their stories of shouldering the mission of the times. 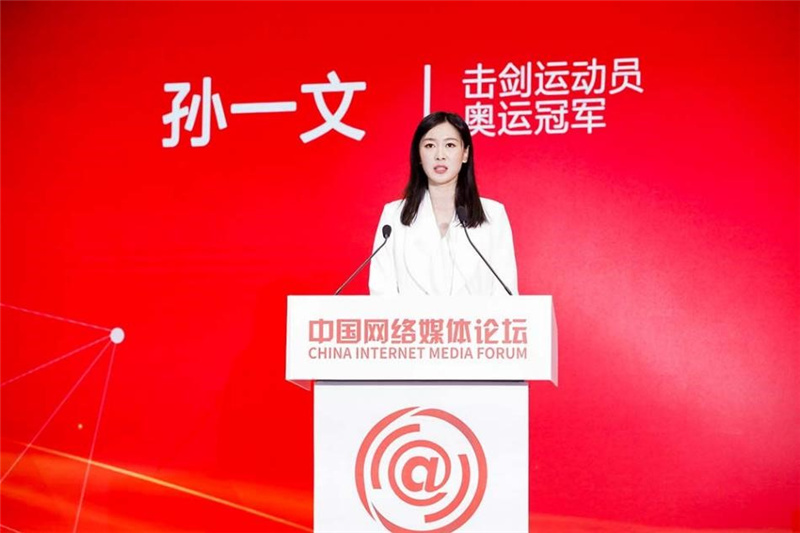 Sun Yiwen, a fencer and Olympic champion, said that in the face of the “flow” brought by the Olympic champion halo, he takes the promotion of the Chinese sportsmanship as his most important responsibility. “I hope to extend the Chinese sports spirit represented by the athletes to the cyberspace, drive everyone to pay attention to and love sports, and to promote the sports that they are engaged in, and to promote the positive energy, especially to the vast number of young people. “

See also  Michetti: "I suffered 86 attacks, but I turn the other cheek" 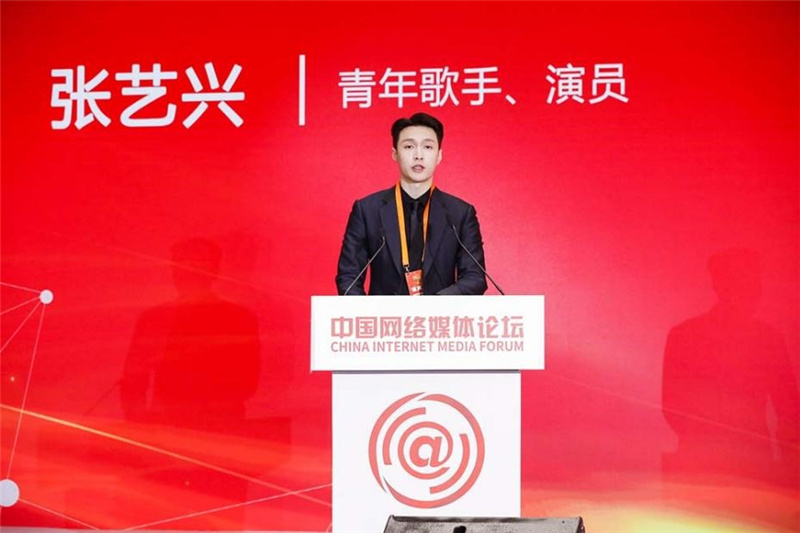 Young singer and actor Zhang Yixing said that integrity is deeply rooted in Chinese culture and inherited in cyberspace. It is the cornerstone of social development and the lifeline of the Internet. In the Internet age, everyone has a “microphone”. How to use the “microphone” well is very important. If you use it well, you can create a clear and clear network environment. If you don’t use it well, it will breed rumors, violence, and infringe the rights of others. “I think I have the responsibility to lead by example, practice integrity, and consciously have more responsibilities to call on the public to respond to online integrity and guide everyone to build a civilized and healthy online spiritual home.” Zhang Yixing said. 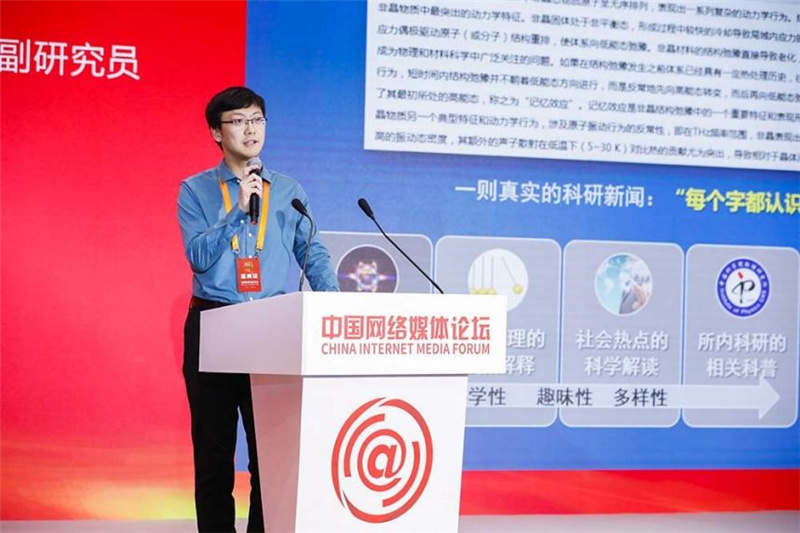 “For us, we must pay attention to the quality of fans”traffic’, because among them, we hope to cultivate people who have a true belief in science and who will become scientific’die loyal fans’ and even join scientific research in the future. Li Zhilin, an associate researcher at the Institute of Physics, Chinese Academy of Sciences, believes that it is an important social responsibility of scientists to cultivate young people’s scientific awareness in popular science. We need not only to do cutting-edge science, but also to care about popular science. 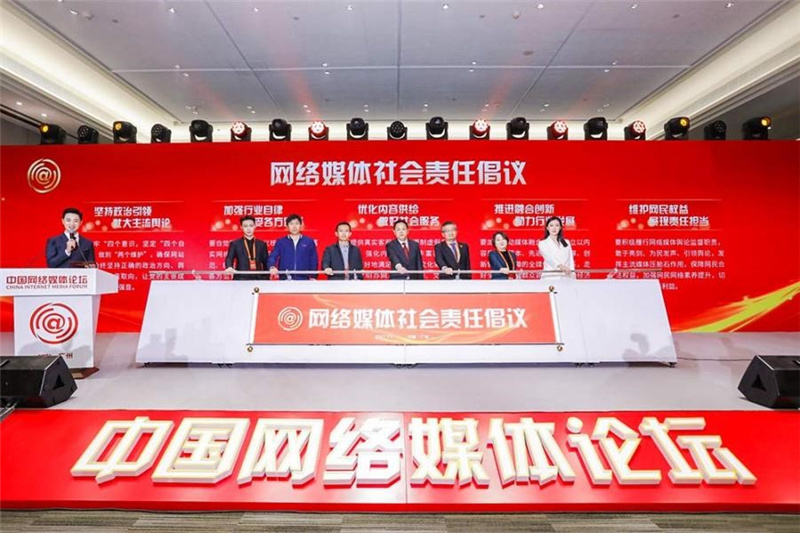 The forum also released the “Internet Media Social Responsibility Initiative”, calling on online media to shoulder the mission of the times and bravely shoulder the social responsibilities of the new era, so that the online world will be refreshed. 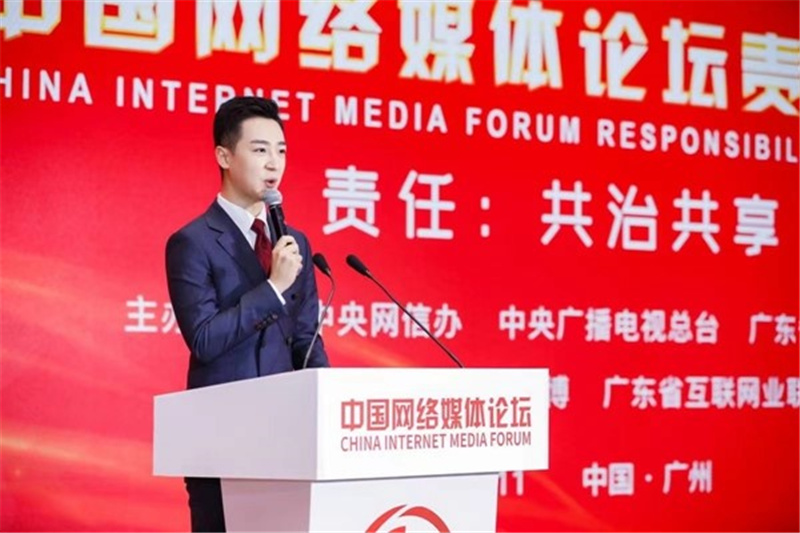 The 2021 China Internet Media Forum is co-sponsored by the Central Cyberspace Administration of China, China Central Radio and Television, and the Guangdong Provincial Committee of Cyberspace Affairs. It will be held in Guangzhou from the 24th to the 25th. The theme of the forum is “Development and order. Let large traffic surging positive energy”, including the opening ceremony, 5 parallel forums, the “Concentric Guangdong, Hong Kong and Macao hand in hand in the Greater Bay Area” network theme activities and new technologies, new applications and new technologies in the field of Chinese online media. Format exhibition.

Cars blocked due to snow, the mayor of...

Bad weather, frost in Sardinia: snow even below...

Fonzie, jeans and memorabilia leather jacket up for...