Over time, the recent beta update of iOS 16 has accelerated significantly, basically on a weekly rhythm.

This is not just last week Apple released iOS 16, iPadOS 16, watchOS 9 and tvOS 16 released the fifth beta update, and now just a week later, just today, Apple pushed iOS 16 again , iPadOS 16, watchOS 9 and the sixth beta update of tvOS 16, of which the iOS / iPadOS 16 Developer Preview Beta 6 for iPhone and iPad has an internal version number of 20A5349b, which shows that its update frequency Noticeably accelerated.

This update mainly focuses on bug fixes. Compared with the previous developer preview version, some functions have been added, and the battery percentage in the status bar has been slightly changed. Overall, there are 6 major functional upgrades.

1. Bring a new lock screen design, users can customize the notification design, as well as the font and color of the lock screen interface.

2. Through the Message App, you can edit or withdraw the sent content, or mark the message as unread.

6. The battery percentage display has been added to the status bar, and a new sound setting has been introduced.

It is worth mentioning that,According to the iOS 16 Beta 6 developer preview update released by Apple, when using battery low power mode in some mobile phone models, a new function is added to turn off the percentage display in the status bar.

In the previous version, the low power mode and the power display percentage function were deeply locked, and the former and the latter would also be turned on at the same time. This update has made changes to this.

Before the iPhone X in 2017, the battery percentage was a standard feature of the taskbar, but the feature was removed because the “notch” at the top of the screen compresses the space. Although this return has been welcomed by many fruit fans, there are also many objections on the Internet, saying that digital percentages are more likely to cause “electricity anxiety”.

So, are you used to turning on the battery percentage function?

However, Mingmei Infinite personally feels that the current battery percentage function is not suitable enough. It would be better if the battery icon filling degree could also change with the change of the power number. People have always had the illusion of being fully charged.

However, as shown in the preview, not all iPhone models support the battery percentage display function, and it is still not available on the standard iPhone 11, iPhone XR, iPhone 12 mini and iPhone 13 mini models.

It’s unclear why the new battery percentage icon isn’t available on some Notch iPhone models, but the excluded models are either “mini” iPhones or LCD displays (non-OLED versions).

Although Apple did not give a clear explanation for this, Mingmei Infinite still hopes that these subsequent models can also support the battery percentage function.

In addition, in addition to optimizing the battery percentage function, iOS 16 Beta 6 does not bring other functional changes, mainly to fix system bugs and improve stability.

According to Apple’s official support documents, this update fixes some issues.

Including a bug where the pointer didn’t work properly when Assistive Touch was enabled, and an issue where the emoji field was missing.

There are also user feedback that the calendar in iOS 16 is also better to use, and you can view various holidays and make-up time at a glance, without subscribing to a third-party calendar.

In addition, iOS 16 Beta6 also fixed some bugs, such as the occasional ghosting of QQ group nicknames, the flashback of Douyin comments, and so on.

Some foreign media said that Apple is expected to release the official version of iOS 16 to all users with iPhone 8 or newer in September this year.

This year, Apple has brought functions such as pre-stage scheduling to iPadOS 16, and productivity is gradually benchmarking against Mac.

See also  Ministry of Commerce: my country continues to maintain strong attractiveness to foreign investment, and welcomes investors from all over the world to continue to increase investment in China - Xinhua English.news.cn

This means that Apple may plan to update iPadOS 16 independently and no longer depend on iOS.

At the same time, the latest news shows that this year’s iPad product update time will also be delayed, which also confirms the news that the official version of iPadOS 16 will be delayed.

At that time, Mingmei Infinite used to describe Apple’s move as a “pioneering”. Apple even dared to “offend the world” and openly confront the entire Internet.

Looking back today, things that I didn’t understand at the beginning are suddenly clear. Apple is promoting its own advertising business.

At that time, I was still too young to know that the “gift” given by Apple had already marked the price in secret.

Nearly half of Apple’s revenue is contributed by the iPhone, and half of its eggs are placed in one basket, which is too risky.

The company had previously mentioned its advertising business on its earnings call, and while some “headwinds” were involved, others believed it could turn things around, meaning there’s still a high level of interest within the company.

For fruit fans, whether it is acceptable or not, in Apple’s own software, iOS 16 and other own systems, more and more advertisements will be pushed. As for this degree, it depends on the manufacturer’s own bottom line.

For mobile phone manufacturers, in the final analysis, software push advertising is a direct money-making project. In the current global economic environment is not optimistic, this is also irresistible, just grasp a standard.

In addition, it is well known that the iPhone is made of glass, which is bulky and easy to break. However, a new Apple patent called “Electronic Device with Textured Zirconia-Based Component” that has been circulated online in the past few days shows a zirconia ceramic material that can be used in future mobile phone models, and is suitable for iPhone. It is understood that this zirconia ceramic material will present a matte effect, which Apple also claims can provide a “matte appearance” for the appearance of electronic devices. Zirconia-based components can be made of ceramics, such as partially stabilized zirconia ceramics or alumina-toughened zirconia ceramics.

The exposure shows that ceramics can be used on the back or key parts of the iPhone to replace the tempered glass on the back of the current mobile phone, which means that the iPhone may use ceramic materials in the future, but because the process takes time to polish, the upcoming iPhone 14 series will not be able to catch up. trip. At present, ceramic materials are only used by a small number of high-end flagships. If Apple uses ceramic materials, it will most likely be applied to the iPhone Pro series. 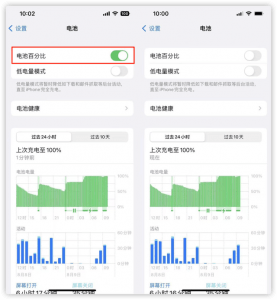 Finally, what Mingmei wants to say is: I have to say that Apple’s design in recent years has always been confusing, such as the digital power display that has returned this time and the resource library added earlier, especially the application resource library. The addition of , makes it impossible for users to use folders to hide some applications, which seems to run counter to Apple’s “respect for privacy” logic. In any case, any new features or changes in the beta version are not finalized, and the current digital power model is mixed, and we will have to wait for the official version to know the final effect.

In this regard, have you upgraded to iOS 16 Beta 6? How is your experience? Welcome to leave a message in the comment area to discuss.Return to Sohu, see more

Eurozone: inflation marks + 10% in September against...

Tim rebounds on the stock market after yesterday’s...

Monstrous inflation at 10% in the Eurozone increases...

Mediobanca, Banca Generali’s objective: it could sell the...

UK: economy up 0.2% in the second quarter