Urban and Rural Markets Have a Strong Spring Festival Travel and Family Carnival–First-Line Observation of Consumer Markets in Various Regions During the Spring Festival Holiday_Guangming.com

Township markets are full of new year’s goods, and returnees are busy purchasing; in urban business districts, restaurant business is booming and products sell well; bookings for long-distance tours of “appreciating the snow in the north and escaping the cold in the south” are booming, and cultural and tourism activities for the Spring Festival in various places are exciting; natural scenery And intangible cultural heritage lanterns, because the introduction of digital technology revitalizes and helps activate consumption… Reporters have seen in many places across the country that the supply and demand of the consumer market during the Spring Festival this year are booming, reflecting the strong endogenous driving force of my country’s economic development.

Food and Beverages in Urban and Rural Markets Are Booming

At 7 o’clock in the morning, on Xiangshan Old Street, Baoding Town, Dazu District, Chongqing, there are all kinds of roasted seeds and nuts, live poultry and fruits, firecrackers and candles. vulgar painting. The 73-year-old Xia Yinghe came here after walking for 2 hours, with fresh white radishes grown in his own field neatly stacked in his backpack.

“During the Chinese New Year, every family has a lot of fish and meat, and the greasy radishes are sold at a good price!” As the radishes are sold out, Lao Xia has changed from a seller to a buyer, choosing his favorite New Year products at the market. The daughter and grandson, who have not been home for a long time due to the epidemic, will go home for a reunion this year. Lao Xia will cook a pot of her daughter’s favorite kelp bacon soup. 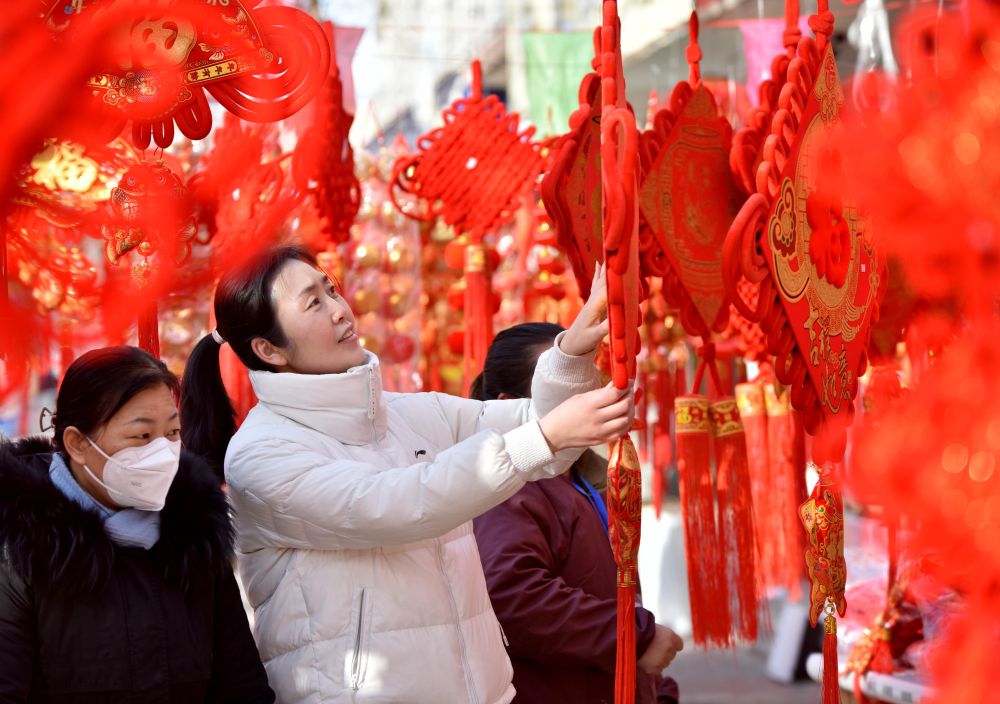 The vegetables are oily and green, and the stewed meat is fragrant… The new year’s goods fair in Beidu Street, Airport New Town, Xixian New District, Xi’an City stretches for nearly two kilometers. Du Longchao and Wang Panpan, who work in a factory in Jiaxing, Zhejiang Province, went to the market early after returning home, happily buying gifts for their children and relatives.

The New Year Market in Beijing Huiju Center launched 40 stalls with selected products for customers to choose their favorite New Year products. Zhou Xin, the general manager of the center, said that on the first day of the Lunar New Year, more than 7,000 underground parking spaces in the shopping mall were full, and many restaurants had to wait for a seat. The sales of gold and jewelry doubled compared with the previous year, and consumption in the Spring Festival became “hot”.

Restaurants along Nanjing Road Pedestrian Street in Shanghai are booming. The time-honored Xinya Cantonese Restaurant is fully booked almost every day, and takeaway and prepared dishes are very popular. The restaurant specially launched small semi-finished set meals for small families who are celebrating the New Year in Shanghai, and also launched related dishes in response to young people’s new hobby of “making tea around the stove”. 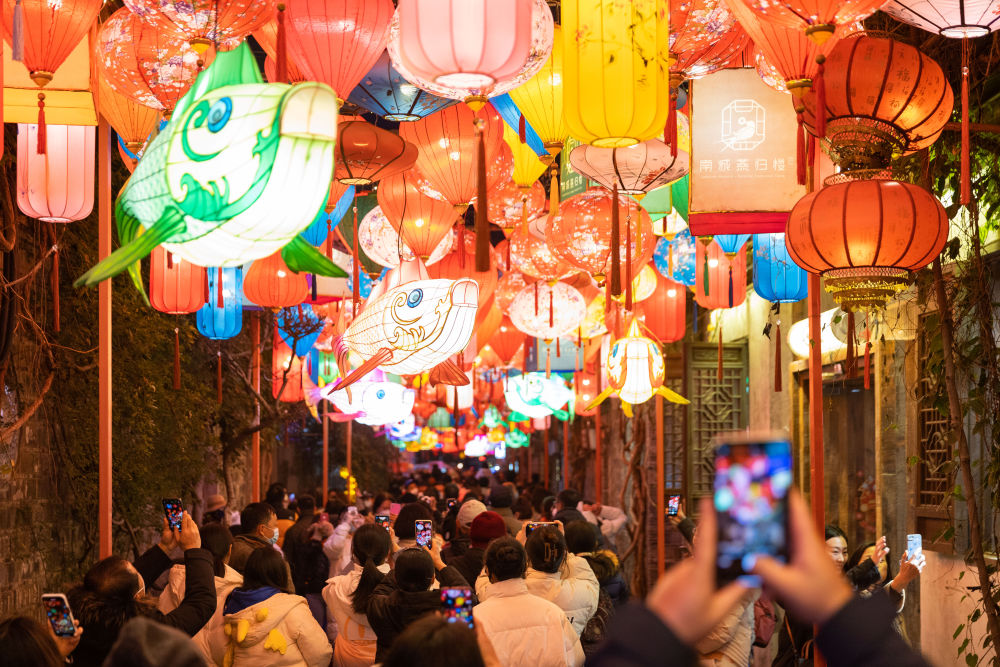 There are close to a million merchants on the Meituan platform marked “No closing during the Spring Festival”, covering a variety of services such as catering, scenic spots, hotels, KTV, and hairdressing, to meet the diverse consumption needs of consumers around the Spring Festival.

Benefiting from the developed Internet economy and fast postal express delivery, people who are going home for a reunion may still be on the way, and the New Year’s goods have arrived first. According to data from Taobao and Tmall, during the Spring Festival this year, the transaction volume of New Year’s goods in other places maintained a positive year-on-year growth; Cainiao’s direct delivery data shows that during the Spring Festival this year, the number of orders processed is expected to increase by 30% year-on-year. Substantial growth.

During the Spring Festival holiday, long-distance travel characterized by “appreciating the snow in the north and escaping the cold in the south” ushered in “explosive” growth.

At 4:00 p.m. in Harbin, the noise and joy kicked off. In the 24th Harbin Ice and Snow World Park, 150,000 cubic meters of ice and snow condensed into hundreds of ice and snow landscapes. Visitors lined up in front of the 500-meter super-long slide. The new “net celebrity” amusement project Big Snow Ferris Wheel Adds a touch of romance. “The long-awaited trip to the ‘Northern Country’ has finally come true!” said Zhang Yi, a tourist from Xiamen. 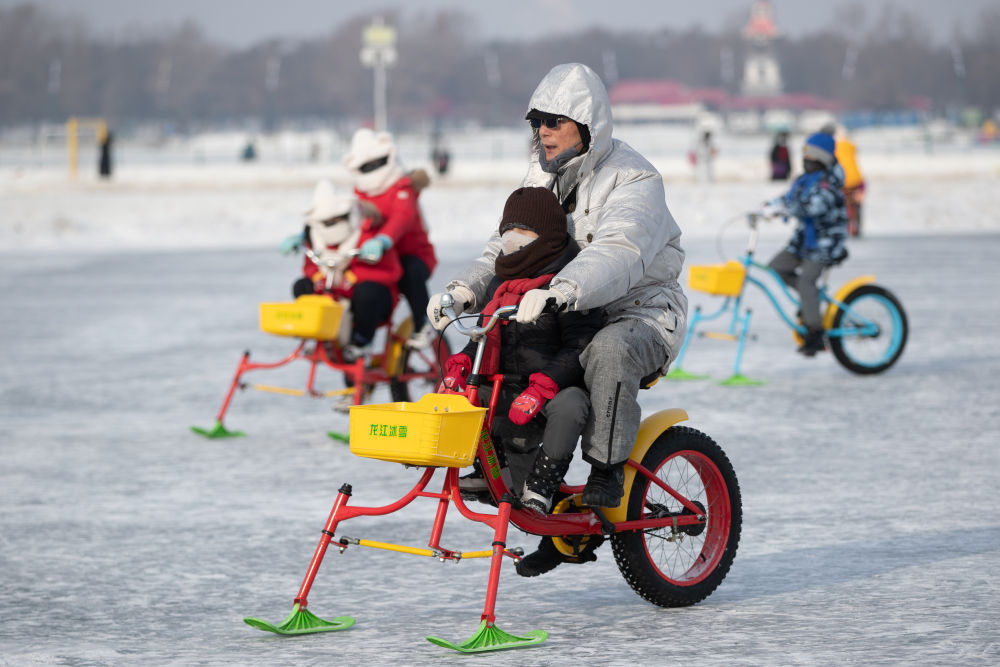 Driven by the Beijing Winter Olympics, Harbin’s “ice and snow fever” continues to exert its strength, driving consumption growth. A western restaurant on Central Street in Harbin has recently accounted for more than 70% of its customers from other places, and the customers mainly come from Beijing, Guangdong, Zhejiang and other places. Wang Xu, the operation manager of the restaurant, said that the booming restaurant business makes us full of confidence in the overall recovery of Harbin’s tourism market.

Xi’an tourist Wu Lan’s family of three came to Hainan by car and stayed in Haikou, Sanya and Lingshui for several days. Wu Lan said that what makes her happiest is shopping. Before that, she had already spent in duty-free shops in Sanya, but she couldn’t help “shopping” in duty-free shops when she returned to Haikou. The family also went to Qilou Old Street in Haikou and watched the traditional dragon and lion dance performances here.

See also  He holds the flashlight in his mouth to steal in a bar: discovered thanks to DNA 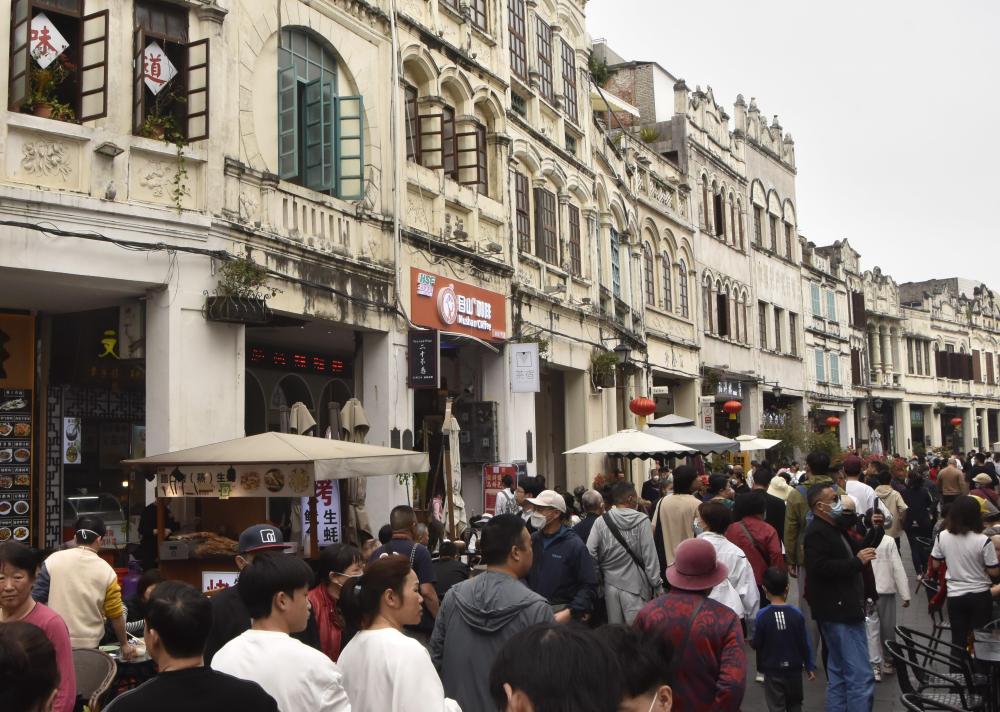 The Spring Festival cultural and tourism activities are brilliant, and local tourism and leisure in various places are also quite new and innovative, realizing the sharing of hosts and guests; the popularity of resort hotels in Beijing, Shanghai and other places continues to rise. 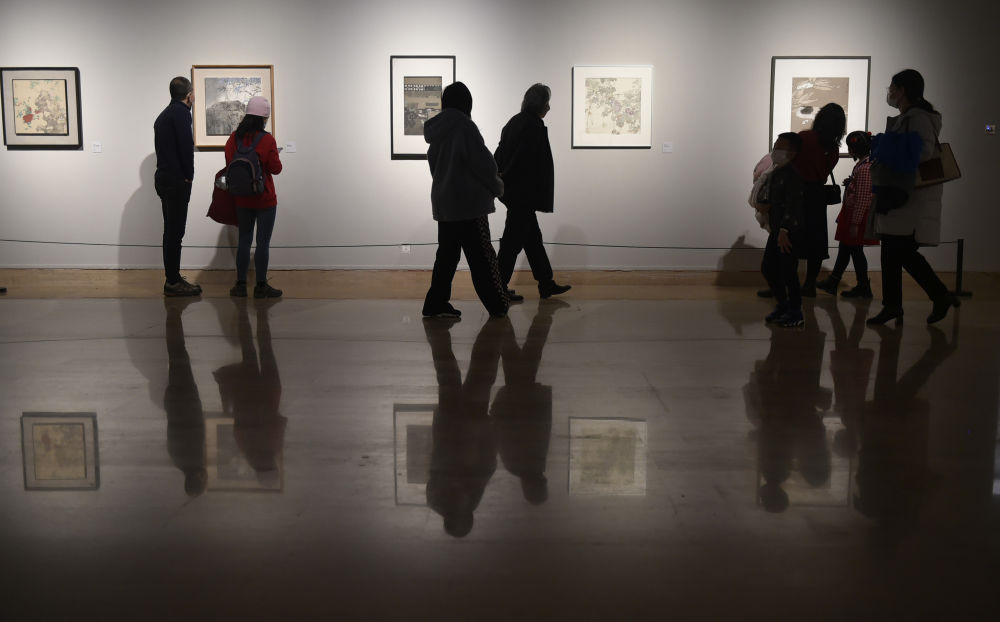 On January 22, the audience visited the “Beauty in the Wide – National Small Fine Art Exhibition” at the National Art Museum of China.Photo by Xinhua News Agency reporter Lu Peng

Beijing cultural and museum units have launched more than 70 exhibitions and more than 140 online and offline cultural and cultural activities. Combined with the culture of the zodiac, there are various forms and full of flavor of the year. Three days before the Spring Festival holiday, Shanghai welcomed 4.4126 million tourists, and more than 500 special cultural and tourism activities attracted tourists from all over the world, especially tourists from the Yangtze River Delta to “check in”. The “Year of Xi’an” Spring Festival cultural tourism activities cover 6 major themes and 44 categories of activities, showing Xi’an’s characteristic year culture in an all-round way. 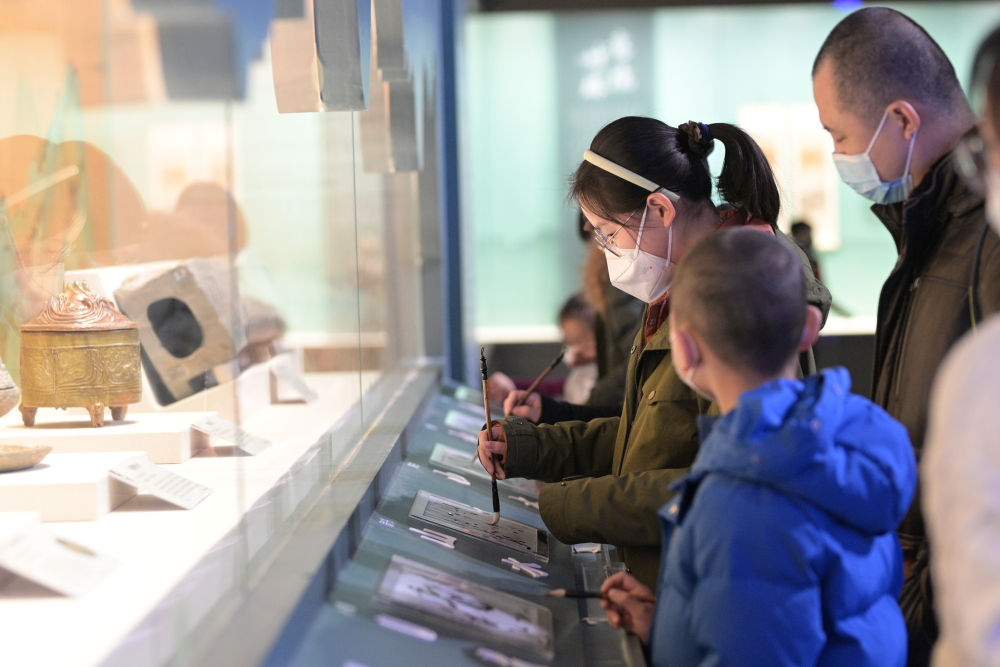 On January 23, the audience experienced writing the calligraphy “Shanshui” at the exhibition site of “Shanshui on Objects” at the China Garden Museum in Fengtai District, Beijing.Photo by Xinhua News Agency reporter Yin Dongxun

The ongoing Shanghai Yu Garden Lantern Festival, augmented reality and other digital technologies lead tourists into a fantasy world of “combining virtual and real”. People come here especially for the name. On the first day of the Lunar New Year, more than 80,000 people entered the Yuyuan Lantern Festival to enjoy the lanterns.

Use your mobile phone to scan the QR code next to the main light group of “Jade Rabbit Dongsheng, Kunpeng Wanli” in the central square to enter the applet, and then point to the surrounding buildings to scan, and a colorful “big fish” jumps on the screen. With the movement of the mobile phone camera, the “big fish” swims around the “Jade Rabbit” lights and pedestrians. Zhou Xi, a Shanghai citizen, took a photo with “Big Fish” and exclaimed that it was the first time that such a “cross-dimensional” photo was taken after admiring lanterns for more than 20 years.

See also  At 7 pm low turnout in the province. In Val di Zoldo 90 votes are missing to defeat the quorum, 50 in Lozzo 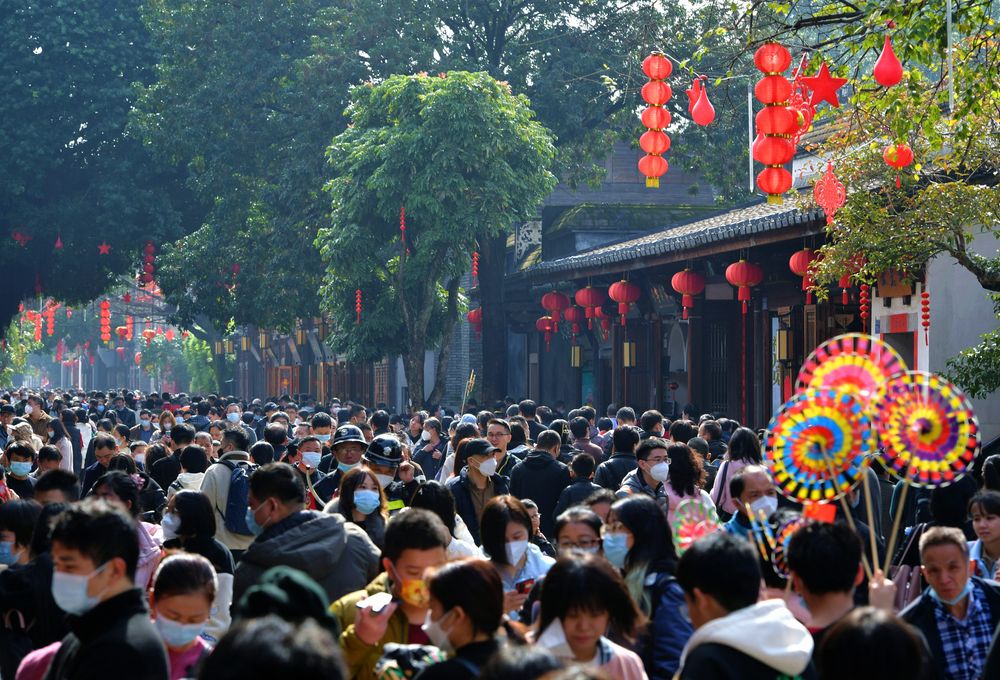 On January 22, tourists played in the South Back Street of Sanfang Qixiang in Fuzhou, Fujian Province.Photo by Xinhua News Agency reporter Wei Peiquan The New Year Lantern Festival on the city wall of the ancient capital of Xi’an, which lasted for 36 years, has also become “fashionable”. The IP characters of the “Prosperous Tang Tiantuan”, whose images are derived from women in the Tang Dynasty, warriors in golden armor, literati, and friendly messengers on the ancient Silk Road, are “out of the circle” , related themes are limited to digital collections and cultural and creative products that sell well online and offline. 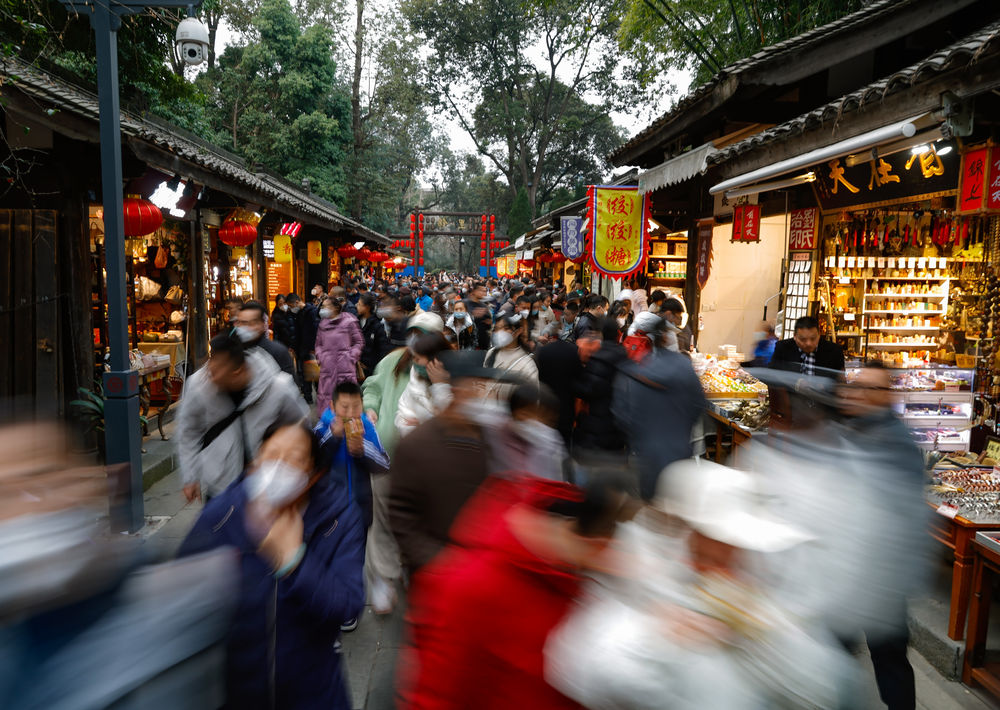 Li Jiwei, deputy director of the Meituan Research Institute, believes that this year’s Spring Festival holidays will see a rapid recovery in consumption in multiple sectors such as catering, tourism, travel, leisure and entertainment, which is a good start for boosting the annual consumer market and promoting economic development.