Original title: Chengdu 8-year-old teenager won the gold medal on the first day of the gymnastics competition in the Provincial Games 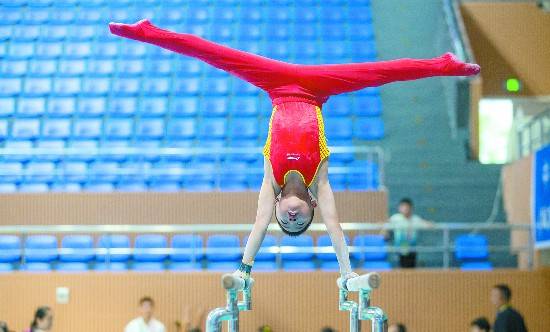 Zhang Junyu in the game

“My goal is to win the Olympic championship!” Sitting on the mat on the sidelines, Chengdu 8-year-old Zhang Junyu told reporters with a smile. Maybe Xiao Junyu at this time doesn’t know how much sweat it takes to achieve this goal, but he has already stood at a new starting point in his gymnastics career. Yesterday, the gymnastics competition of the 14th Sichuan Games kicked off at the Leshan Sports Center. Chengdu teenager Zhang Junyu won the men’s group C all-around gold medal in the first day of the competition. The goal of “king of gold” has taken the first step. In the next few days, the members of the Chengdu gymnastics team will attack more gold medals.

4-year-old into a junior sports school

From “not serious” to loving gymnastics

In the gymnastics room of the Chengdu Youth and Children’s Amateur Sports School, there are always stories to tell. The coaches always tell the children about the brothers and sisters who have gone from here to the world arena, which of course also includes the story of the Olympic champion Feng Zhe. After the Spring Festival in 2018, Zhang Junyu, who was more than 4 years old, came to the gymnastics room of the Chengdu Junior Sports School. Everything here was unfamiliar, and his natural curiosity made him feel new to everything, but at that time he didn’t know that he would I like gymnastics.

“When he first came, he was the least serious one, but he was very talented, and that’s how many children started to practice gymnastics. With the advancement of learning and seeing many brothers and sisters have achieved good results, Zhang Junyu has become I became more and more serious, and I began to really love gymnastics.” Wang Xiaogang said. Two years ago, Zhang Junyu entered the echelon of the Sichuan gymnastics team for training, and came to a higher platform, which also allowed him to explore the greater charm of gymnastics.

It is reported that the Provincial Games is also the selection competition for the Sichuan Gymnastics Team. Wang Xiaogang, the coach of the key gymnastics class at the Chengdu Minor Gymnastics School, said that after the Provincial Games, he hopes that more Chengdu gymnasts will enter the provincial team for training and go to a higher level. The platform continues to work hard.

After 4 years of training, Zhang Junyu is already a leader among his peers. On the field of the Provincial Games, when asked about his goal of participating in the competition, Xiao Junyu said with a smile: “I want to win the championship.”

Zhang Junyu on the field was very firm, and he completed the movements very well in the 6 events he participated in. After finishing all the competitions, he even showed a victory gesture in front of the reporter. “Are you the highest scorer?” Facing the question, Zhang Junyu said, “It should be.” Then he was not at ease, got up and asked the coach to confirm again and again, and the coach also encouraged him to continue to work hard.

See also  Double zero in Rome, but Di Grassi raises the Audi: "We will come back stronger"

After Zhang Junyu won the all-around gold medal, he was not too excited. It seemed that all this was in the plan of himself and his coach. When asked about his future goals, he said: “My goal is to win the Olympic championship.”

Milan, De Ketelaere from retirement in Belgium: “The...

The loneliness of the number 9 Immobile, the...

Svindal shock: “I have cancer, prevention is essential”,...