CCTV News (Focus Interview): On the 27th of the twelfth lunar month, General Secretary Xi Jinping visited cadres and masses in various places through video connection, and communicated cordially with everyone. In the past ten years, every Spring Festival, General Secretary Xi Jinping will visit and express condolences to grassroots cadres and the masses in various ways, and extend good wishes for the New Year to people of all ethnic groups across the country. From cities to villages, from old people to children, from wanderers returning home to staff stationed at their posts, all of them affect the heart of the general secretary. Are their New Year’s goods ready? What are the difficulties? What are your plans for the new year? He is very concerned about the people’s livelihood and the people’s wishes. “Focus Interview” started broadcasting the series “General Secretary’s Concern” today, to see the places the General Secretary visited on the eve of the Spring Festival, and to see what changes have taken place in their lives today.

On January 18, before the arrival of the Spring Festival, General Secretary Xi Jinping made video connections with grassroots cadres and the masses in Heilongjiang, Fujian, Xinjiang, Henan, Beijing, Sichuan and other places to visit medical staff on the front line of epidemic prevention, elderly friends in welfare homes, energy conservation For employees of enterprises, cadres and workers of high-speed railway stations, merchants and the masses in agricultural product wholesale markets, and cadres and masses at the grassroots level in rural areas, we will send you the care and condolences of the Party Central Committee. Shiyi Village, Beichuan Qiang Autonomous County, Sichuan Province is a post-Wenchuan Earthquake reconstruction village. During a video connection with them, General Secretary Xi Jinping extended his best New Year wishes to farmers across the country and comrades who are struggling in the front line of rural revitalization: “New Year’s Eve The rural revitalization of the era requires the development of characteristic agricultural products and tourism. You have a good look, and you should do better, make further progress, and achieve greater achievements in rural revitalization. “

Every Spring Festival, the production and life of the people in the disaster-stricken areas always affects the heart of the general secretary, and the Wenchuan earthquake-stricken area is the place he is particularly concerned about. 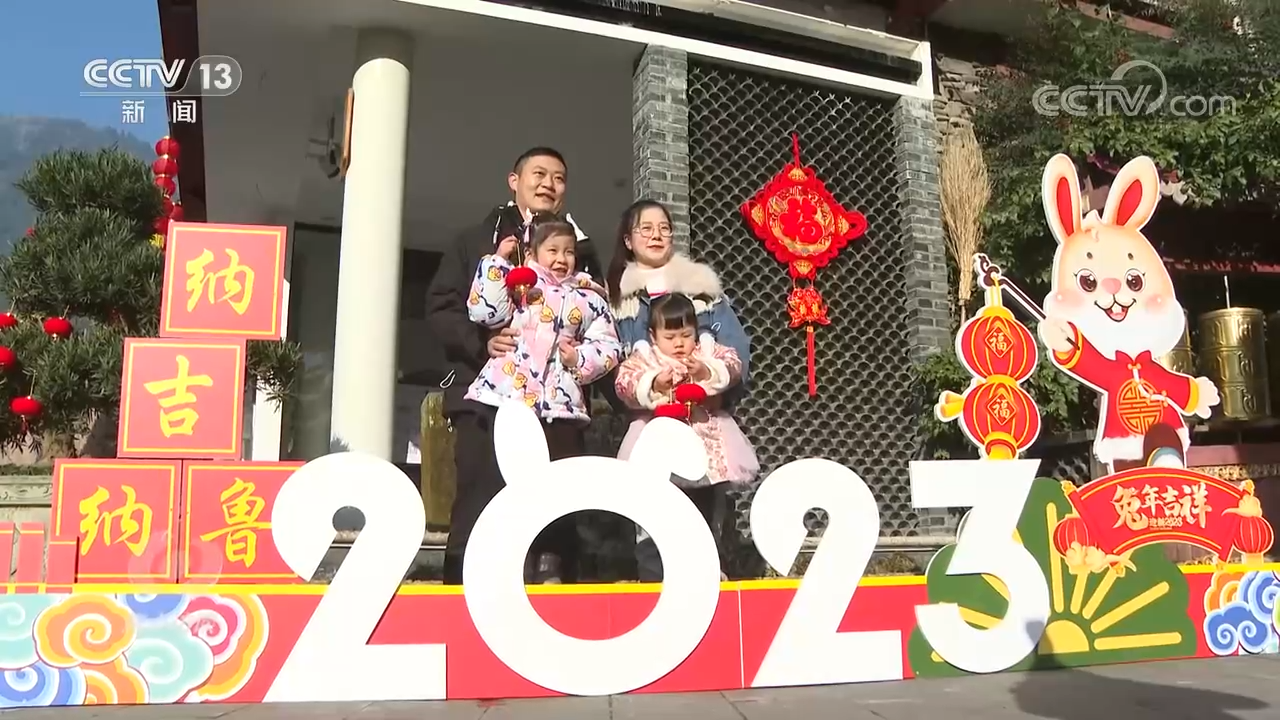 On the eve of the Spring Festival, the reporter came to Yingxiu Town, Wenchuan County. Although the weather was cold, there were still many tourists here. At night, the town is full of colorful lights, and restaurants such as hot pot restaurants and barbecue restaurants are even more lively. The hot Bashu cuisine and diners shuttle back and forth, making the operators full of expectations for the future.

Looking back at the past, the new starting point for the development of Yingxiu started from the inspection five years ago by General Secretary Xi Jinping. On February 12, 2018, General Secretary Xi Jinping came to Yingxiu Town to listen to a report on the recovery, reconstruction and development after the Wenchuan earthquake. He emphasized the need to continue to make efforts in promoting industrial development and improving people’s livelihood to build a better home for the people. The general secretary also walked into a local tea shop, inspected the traditional black tea making process, and personally experienced the production process of butter tea. 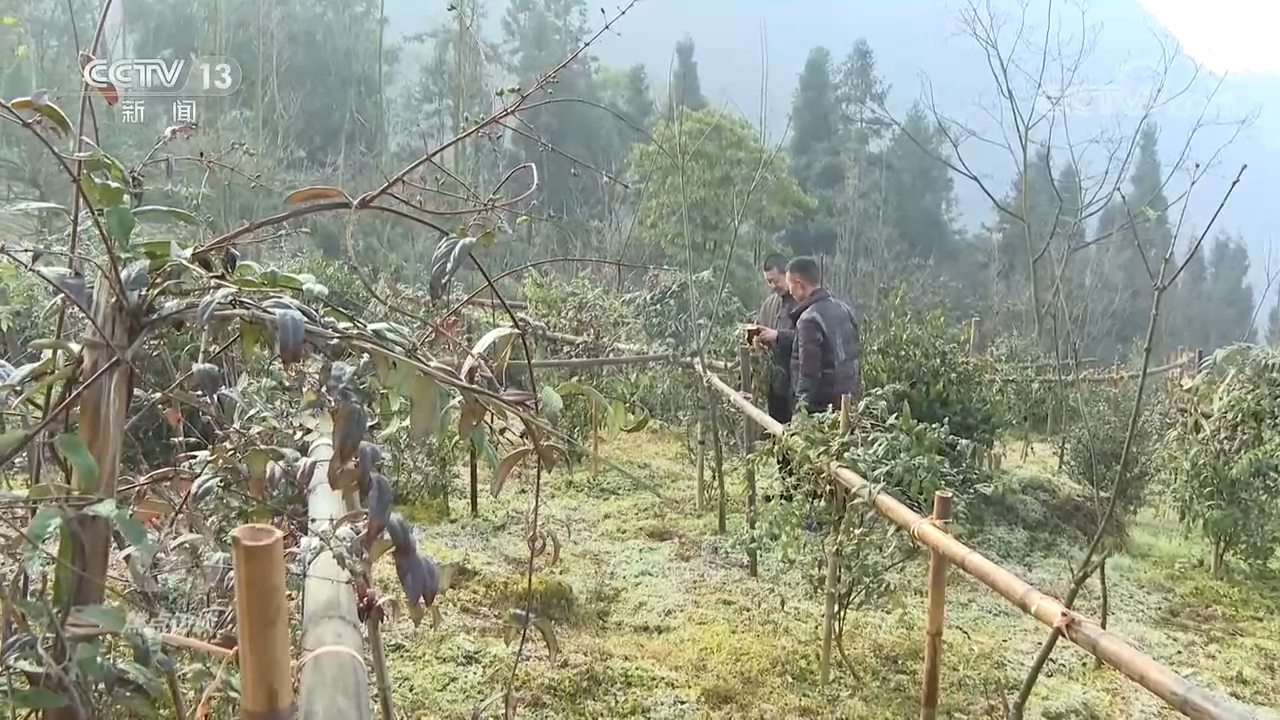 During the inspection in Yingxiu, General Secretary Xi Jinping was very concerned about the development of the local tea industry to drive the masses to become rich. Yingxiu used to be a necessary place on the Sichuan-Tibet Ancient Tea-Horse Road. Before the Wenchuan earthquake, tea plantation was a characteristic industry in the townships in southern Wenchuan, but the earthquake severely damaged the local tea gardens. Since 2018, more than 1,100 acres of ancient tea gardens have been restored in Wenchuan County. Not long ago, the reporter came to Huangjiayuan Village, Yingxiu Town to learn about the situation. There are now 200 mu of tea gardens in the village, which can produce 20,000 catties of fresh tea every year, bringing an income of nearly 300,000 yuan to the villagers. When the reporter interviewed, it happened to catch up with the dividend distribution meeting of the collective economy of Huangjiayuan Village.

Huangjiayuan Village is a village with the highest terrain and the most remote location in Yingxiu Town, and its development is relatively backward. In order to facilitate tea farmers to plant, in recent years, the local government has also expanded roads and newly installed solar street lights. Three years ago, the local area also developed the cultivation of wild honeysuckle, which has become a new helper for local prosperity. After processing, wild honeysuckle is very popular in the market.

Jiang Weiming, the operator of Chaxiangzi Tea Factory: “The general secretary has an entrustment to our intangible cultural heritage project, which is to strive for excellence, make it a famous brand, and make more contributions to the construction of the ‘Belt and Road’. Our honeysuckle, until today, even if the epidemic hits , and are still sold to many countries by mail.”

See also  Volunteer in half the world: "So I visit the planet away from the golden cages of tourism"

Jiang Weiming: “They have always had the habit of making honeysuckle, so we turned the intangible cultural heritage into a living industry to support it. The honeysuckle does not wither in winter, and the Chinese nation is indomitable, showing the self-reliance and perseverance of the people in our land. “

The spirit of self-reliance, self-improvement and perseverance made Yingxiu people stand up again from the ruins. On February 12, 2018, during the inspection of Yingxiu, General Secretary Xi Jinping also walked into the restaurant along the street of Yingxiu, chatted with the owner, asked them if their business was good, how much money they could earn in a year, and wished everyone to build a better future with hard work Achieve greater success in life. On the eve of the Spring Festival this year, a restaurant called “Old Place” in Yingxiu is still rushing to expand and construct. Like most of the shops in Yingxiu, “Old Place” is also run by a family. 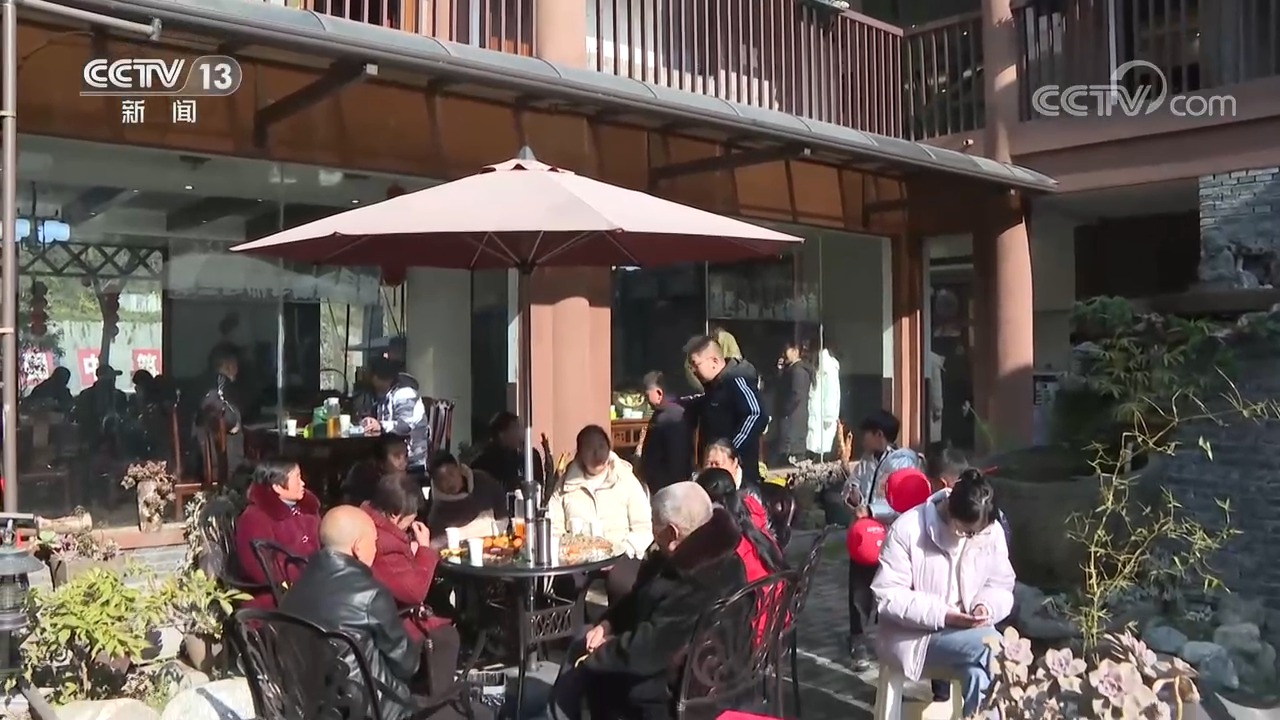 “The whole family goes to battle” has always been a tradition in Hu Liangbing’s family. He is the second child in the family, and he first learned to cook in the first small restaurant opened by his eldest sister. Although the family worked hard, the days became more and more prosperous, until the Wenchuan Earthquake in 2008 pressed the pause button on the happy life of the family.

After Yingxiu completed its reconstruction, a brand new town was completed, and Hu Liangbing led the surviving family to restart the “Old Place” restaurant. In 2018, General Secretary Xi Jinping visited Yingxiu and proposed that “we must protect the earthquake site and make it an important patriotic education base.” The transformation and upgrading of Yingxiu has a new direction.

Ou Zhiyong, Secretary of the Party Committee of Yingxiu Town, Wenchuan County, Sichuan Province: “In accordance with the instructions of the General Secretary, we have to find an industry while making up for the shortcomings. We strengthened the patriotic education and training sector, which greatly encouraged our The masses, the masses have seen the other side of development and have confidence. In just five years after 2018, we have started patriotic education and training again under the condition that the tourism industry has not been lost.” 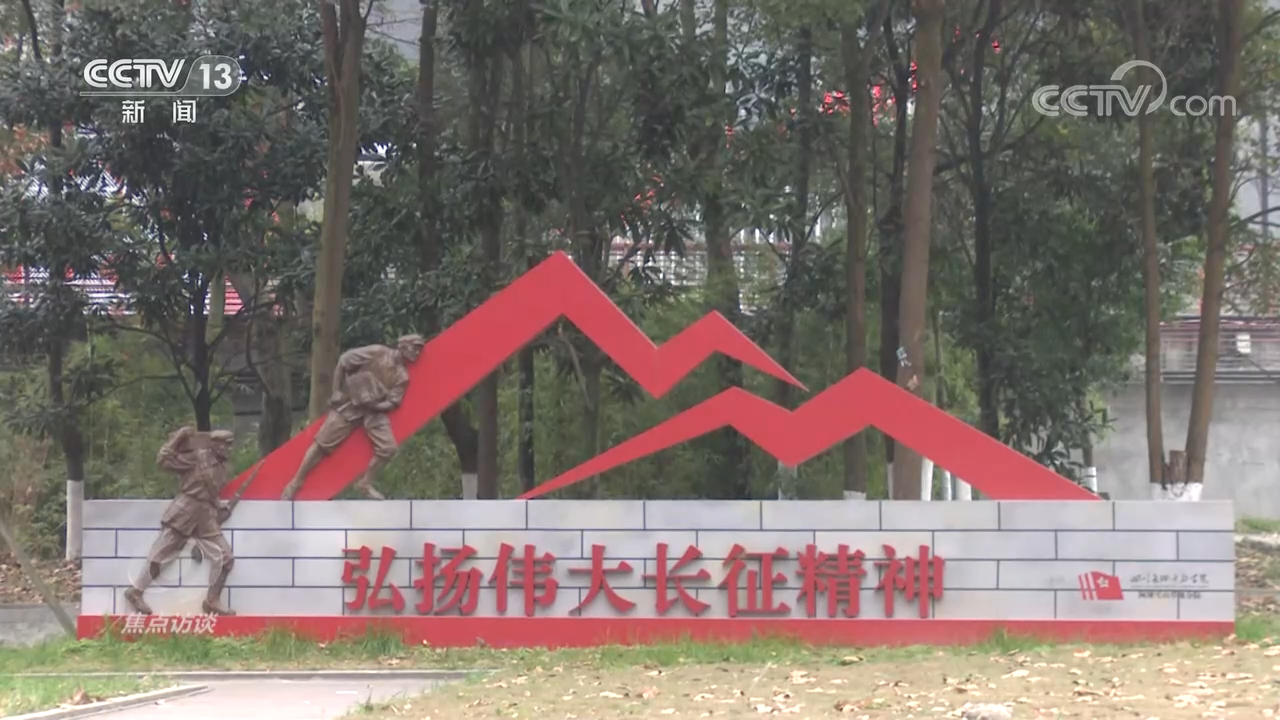 Since 2018, Yingxiu has relied on red resources such as the spirit of earthquake relief and the Long March of the Red Army, taking the training industry as the leader, upgrading infrastructure, and creating high-quality courses and routes.

Li Jianjun, Deputy Governor of Aba Prefecture Government in Sichuan and Secretary of Wenchuan County Party Committee: “Wenchuan is a place that General Secretary Xi Jinping cares about very much. He has visited twice in person and has high hopes. The Decision to Improve Red Resources, Continue Red Bloodline, and Strive to Build a Red Spiritual Highland”, established the leadership of loving the party and patriotic education demonstration, and fully promoted industrial development and improved people’s livelihood.”

In the past five years, Yingxiu’s patriotic education and training classes have reached 1947 classes, and the cumulative number of trained people has reached 255,000. People here experience the great spirit of earthquake relief and the experience of the Red Army’s Long March. Catering, homestay and other industries also have better development opportunities. Seeing this momentum, in 2021, Hu Liangbing’s family rented another courtyard house and created the latest version of the “old place”.

The process of several changes and gradual growth of the “old place” also witnessed the growth and rebirth of a family. Hu Liangbing’s eldest sister was killed in the earthquake, but her daughter grew up healthily under everyone’s care, and is now married and has children.

Strolling in today’s Yingxiu Town, the unique three-storey buildings are neatly arranged, creating a peaceful scene. The once devastated Yingxiu Town has taken on a new look. General Secretary Xi Jinping’s earnest entreaty to “build a better home for the people” when he inspected Wenchuan is changing. become a reality.

Chaxiangzi Tea House is building a “earth tea warehouse” that integrates the characteristics of Han, Qiang and Tibetan.

Feng Xin, the daughter of the eldest sister of “Old Place”, is responsible for taking care of the coffee and tea. She plans to incorporate some current popular styles into “Old Place”.

The elderly in Yuzixi Village, Yingxiu Town had a big dinner before the Spring Festival. After the Wenchuan Earthquake, every important festival, the village committee organized them to meet together.

Effect “Spare”: the future King William and his wife Kate collapse in the polls. And the Sussexes will be barred from the coronation

“We are going to ban assault weapons at...

How are the studies of the road to...

Man beat his wife and took the children...

Government of Korea will support Villavicencio to convert...

Public toilets in the center: an emergency that...

Competition came out to Avianca, JetSMART enters the...

The third plenary session of the Eighth Municipal...

Five dead in one day in Santiago de...